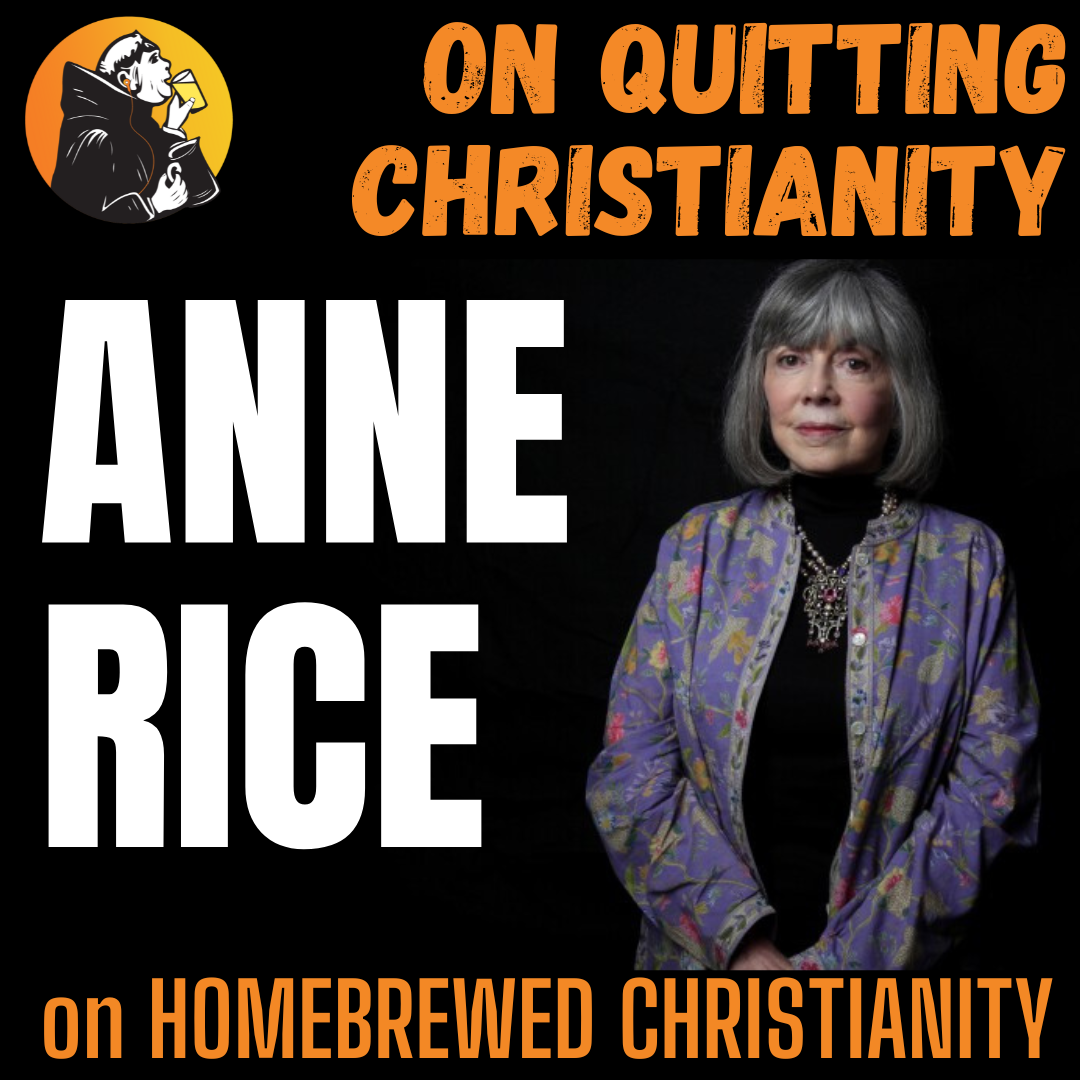 I am sure many of you were saddened by the news of Anne Rice’s passing. She visited the podcast in 2010 after publicly ‘quitting Christianity’ and enough of the long-time listeners asked for the interview we decided to share it.

My buddy Mike occasionally did interviews back then and he is the one asking the questions here. Since it was 2010 the technology was not as good, but I reworked the audio as best as I could.

In the wee hours this morning I heard the heartbreaking news that Anne Rice died, surrounded by loved ones, due to complications from a stroke.
Anne revolutionized gothic horror writing with her layered, humanizing, and sensuous approach to storytelling, initiating a trend toward more sympathetic portrayals of (say) vampires, telling the story of their eternal power and anguish from *their* point of view, which became the de facto norm for later shows like Buffy the Vampire Slayer, Twilight, and True Blood. The LGBTQ community in particular embraced her supernatural creatures’ ‘outsider’ status as their own, and she embraced them right back, becoming an early safe haven and trusted voice for queer folk.
As a young evangelical growing up in the Bible Belt, her writing was *especially* forbidden, and I recall the rushes and flushes I felt as a kid when sneaking some of her fiction in grocery store aisles while my mom was shopping, a world of history, mysticism and sexuality opening up to me.
When Anne publicly announced her conversion from atheism to Christianity in 2005, I was among the first journalists to cover the story, in what became an award-winning profile for RELEVANT Magazine. You can read an archive of that story in the link below. When I met Rice at a progressive Baptist church in Birmingham, she was telling her story of coming to faith with nuance and intelligence, in a conversation proctored by a Roman Catholic priest, a rabbi, and a progressive Baptist minister. In our more private conversation that followed, she explained how her deeply-felt faith came from her inner historian’s keen eye for mystery:

“Well, [being Christian] certainly has to be personal experience, but I did read myself back into faith. It was history, reading the story of the Jews in time and realizing that there was no rational explanation for the survival of the Jewish people. It was the biggest mystery history ever offered me—how did these people survive? That was the beginning. And then the second big mystery was this: How in the world did Christianity spread the way it did, to become an international religion by A.D. 110? How did that happen? In trying to answer those two questions, I read myself back into belief. And then belief came.”

She temporarily abandoned her vampires and fallen angels, saying “the truth is, I’ve found what those characters were looking for. I can’t continue those stories because they don’t work for me anymore. The vampires are not metaphors for the outsider for me, because I don’t feel like an outsider anymore. I feel like I’m included in a great big wonderful family.”
She went on to write two better-than-average historical fiction novels about the early life of Jesus, but within a couple years of publishing her spiritual memoir ‘Called out of Darkness,’ her sense of belonging in the wider Christian family had strained to its breaking point.
In 2010 she wrote: “Today I quit being a Christian. I’m out. I remain committed to Christ as always but not to being “Christian” or to being part of Christianity. It’s simply impossible for me to “belong” to this quarrelsome, hostile, disputatious, and deservedly infamous group. For ten years, I’ve tried. I’ve failed. I’m an outsider. My conscience will allow nothing else.
In the name of Christ, I refuse to be anti-gay. I refuse to be anti-feminist. I refuse to be anti-artificial birth control. I refuse to be anti-Democrat. I refuse to be anti-secular humanism. I refuse to be anti-science. I refuse to be anti-life. In the name of Christ, I quit Christianity and being Christian. Amen.”
Once again, I was able to talk to Anne about this transition — this time for my friend Tripp Fuller’s podcast, Homebrewed Christianity. We were able to have an extensive conversation in which she was just as incisive and gracious as before. I’m working with Tripp to see if we can bring this conversation back from the archives. To NPR at the time, she elaborated about what this did or didn’t mean:
“Certainly I will never go back to being that atheist and that pessimist that I was. I live now in a world that I feel God created, and I feel I live in a world where God witnesses everything that happens. … That’s a huge change from the atheist I was when I wrote the vampire novels… I found what the characters in the vampire novels were looking for. They were groping in the darkness; they lived in a world without God. I found God, but that doesn’t mean that I have to be a supporting member of any organized religion.”
I wish Anne had been better acquainted with progressive Christianity, where she could have loved Jesus *and* women, science, and the LGBTQ community whole-heartedly. But I know that, regardless of the labels that she rather fluidly adopted and discarded, she remained a consistent advocate of those whose place in society was often in question, while continuing to write her journey in provocative fiction.
Anne and I stayed in touch via email intermittently for a while, as she did with countless fans via her prolific Facebook fan page, where she held court with open-ended questions about society, politics, and spirituality.
I’m going to miss Anne on this side of the veil. And I pray that she’s feeling, more deeply than ever, her belonging in the great, unbroken cloud of witnesses, that perichoretic dance of God, creation, and the ancestors. A space where doubt is honored for the treasure of conscience it is, and faith becomes expansive sight. 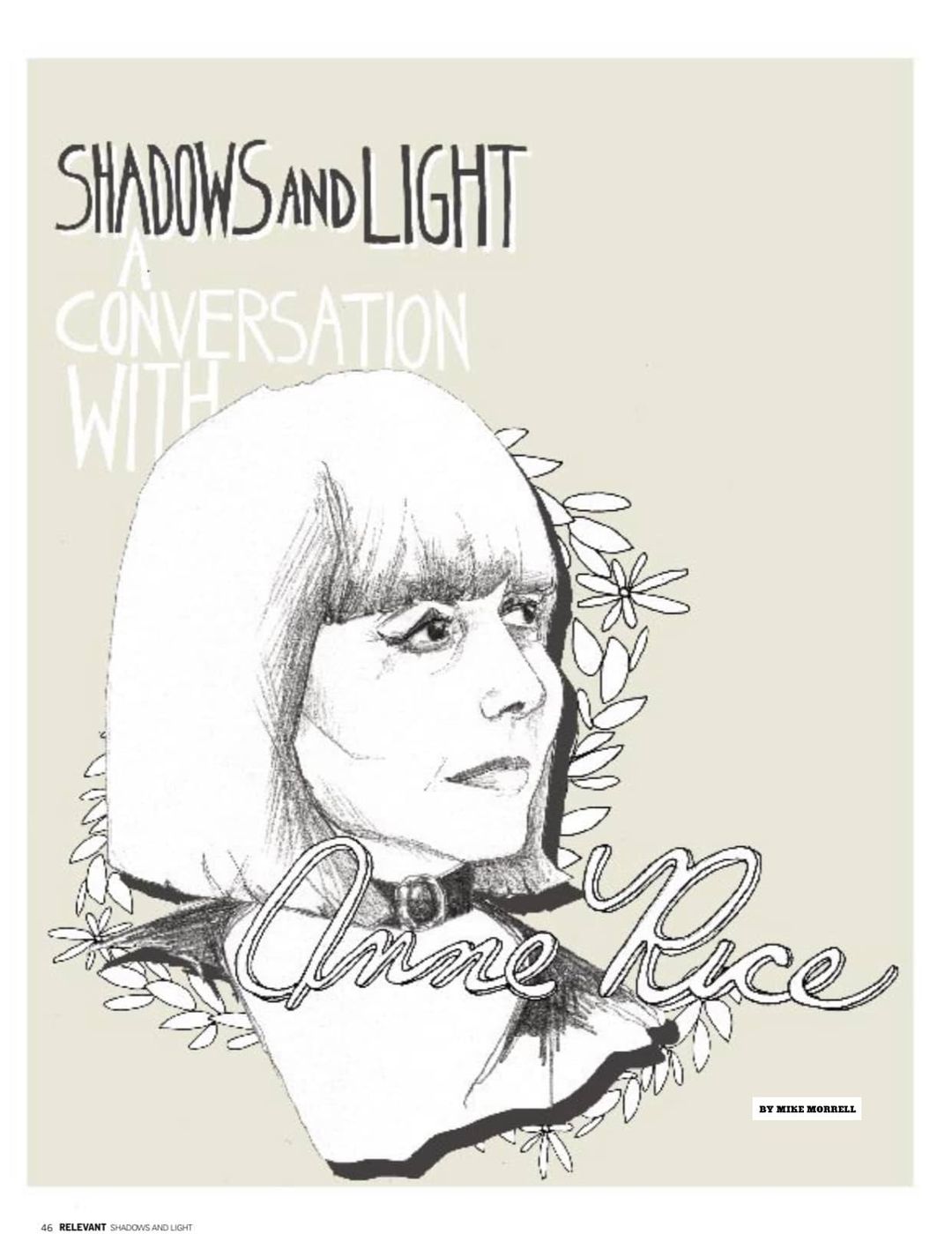