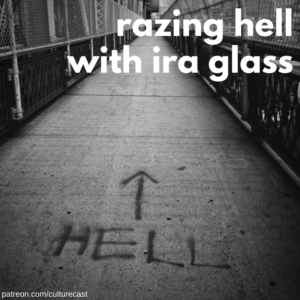 In this episode of the CultureCast, Amy gets to share some big news about her new position in Texas, and Christian gets his nerd credentials boosted by Ira Glass.

Amy and Christian look at the state of leadership in the church today.

Up first, Christian interviews Amy in a pre-interview interview about what it takes to be a leader, the challenges of leading people who are leaders in other contexts, the problems with and tensions of being welcoming, and the lure of certainty.

Then, Christian talks with Ira Glass about his movie Come Sunday, now available on Netflix. From IMDB: Based on an episode of the public radio series This American Life, which centers on Bishop Carlton Pearson, a rising star among evangelicals until he was ostracized by his own church and declared a heretic after he started preaching that there is no Hell.

Hear about what drew Ira, a self-proclaimed atheist, to this story and what about it made him want to make it into a movie, what excited him about the movie, the lack of mainstream movies or shows that accurately depict Christians and the importance of correcting that (especially given our current cultural moment), the tension between relationships and ideology, intent versus impact, his philosophy behind telling any story, what makes for a good story, and the role that This American Life plays in our society. Plus:

The very first episode of the Surviving the Bible podcast is out! You can listen to it here. Make sure to subscribe and share.

Christian will be doing a live podcast in Chicago this Wednesday, April 18th. You can get more info and tickets here.

Amy’s book recommendation – Resist and Persist: Faith and the Fight for Equality by Erin Wathen