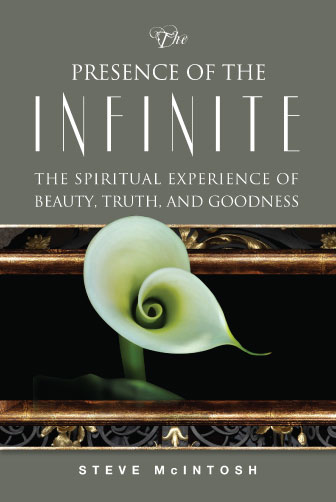 non-dual thinking, spiral dynamics and integral philosophy. Steve McIntosh is back on the podcast for the fun. We discuss his new book The Beauty of the Infinite and after you hear this conversation I suggest you get your ‘click’ on and get the book headed your way.

If you are down for some fun consider joining Steve and me at Enfolding Spirituality conference here in Redondo Beach, along with Don Beck, Rob Bell and plenty of others.

Steve McIntosh  is a leader in the integral philosophy movement and author of the new book on spiritual experience: The Presence of the Infinite (Quest 2015). Steve is also author of Evolution’s Purpose (SelectBooks 2012), and Integral Consciousness and the Future of

He currently works as President and Co-Founder of the nonprofit social policy organization: The Institute for Cultural Evolution. In addition to this think tank, and his work in philosophy, McIntosh has had a variety of other successful careers, including founding the consumer products company Now & Zen, practicing law with one of America’s largest firms, working as an executive with Celestial Seasonings Tea Company, and Olympic-class bicycle racing. He is an honors graduate of the University of Virginia Law School and the University of Southern California Business School, and now lives in Boulder, Colorado with his wife and two sons.