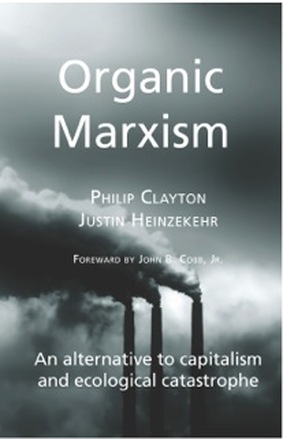 If you’re like me and have ever wondered what a “process Marxism” would look like, the recently published Organic Marxism: An Alternative to Capitalism and Ecological Catastrophe by Philip Clayton and Justin Heinzekehr is an exciting vision of such a possibility.

It is in fact the first serious attempt to fold process philosophy, in both Whiteheadian and Chinese forms, into Marxism. The result is what the authors call “Organic Marxism”, a constructive postmodernism for our time of environmental crisis that offers theoretical and practical possibilities for a new ecological civilization.

Organic Marxism is published by Process Century Press in preparation for the 10th Whitehead International Conference in June 2015, which is called “Seeking an Alternative: Toward an Ecological Civilization.” I plan to participate in the conference, and encourage everyone who can to do so as well. It will bring together some of the most important figures in the environmental movement, including Bill McKibben and Vandana Shiva, along with many of the most significant process thinkers, including John Cobb, Catherine Keller, Joseph Bracken, Bruce Epperly, William Connoly, Monica Coleman, Roland Faber, Marjorie Suchocki, Jay McDaniel, and Philip Clayton, along with younger process thinkers like Tripp Fuller, Brianne Donaldson, and Justin Heinzekehr. And perhaps not surprisingly, after co-writing Organic Marxism, Clayton will be leading a discussion on Marx and Whitehead.

Having previously published 22 books and dozens of articles, Clayton’s important work in philosophical theology and the science and religion dialogue is by now familiar to many. He is a professor at Claremont School of Theology where Justin Heinzekehr, his former student and now co-author, is also a doctoral candidate in religion. Because their work is primarily in theology and religion, this book on ecological economics and politics might seem a bit surprising. And yet both of them work within the school of process thought, which is an amazingly diverse tradition that branches out into virtually every area of academic research. In many ways, Organic Marxism takes its lead from the work of the great process theologian John B. Cobb Jr., who writes the forward to this book. After starting his career as a Christian philosophical theologian, he shifted by the early 1970s into a focus on a variety of other topics, including economics, biology, ethics, politics and ecology. Writing one of the first book-length philosophical texts on the ecological crisis, Cobb later went on to write a massive work on ecological economics with the economist Herman Daly, which serves as the major inspiration for Clayton and Heinzekehr’s economic proposals in Organic Marxism.

At the core of the book is the conviction that “Global capitalism has created the greatest ecological and humanitarian catastrophe in the history of human civilization” (4). Throughout Organic Marxism, Clayton and Heinzekehr make a series of powerful and convincing arguments to show that this is in fact the case and that the best solution is Organic Marxism, which affirms “hybrid [economic] systems that combine profit-making activities with regulations that are designed to prevent corruption, environmental abuse, and the inordinate acquisition of wealth by a small number of citizens” (236). By reinterpreting Marx against the dominant Western conceptions of him, they argue that “socialist systems can retain an appropriate place for entrepreneurial activities…suitably constrained market forces can benefit the public good” and lay the foundation for a new ecological way of living (47).

They therefore resist a view of Marxism that would totally eliminate any place for market forces, competition, and private ownership (7). For them, the continuing relevance of Marx has less to do with his efforts to prove a strict dialectical materialism and more to do with his “work as a social theorist, a historian of economics, and a student of the class struggle” (60). They also reject the classical Marxist notion that ideas, philosophy, and religion are impotent and merely “epiphenomenal,” without any liberating power. In an organic perspective (as understood within process thought), postmodern science and philosophy challenge this kind of crass reductionism with a more open-ended, relational, pluralistic, contextual, and ecological style of Marxism.

As such, Clayton and Heinzekehr are highly sensitive to the common views of Marx as deterministic, anthropocentric, anti-religious, reductionistic, totalizing, and utopian. And yet they argue for the ongoing relevance of Marx beyond these modernist limitations and stereotypes of his thought, importantly drawing on recent interpretations of his mature thought (e.g., Jeremy Bellamy Foster) that stress Marx’s implicit environmental concerns. They also consider some recent attempts to resurrect Marxism in the work of Jacques Derrida, Slavoj Zizek, and David Harvey. Although they recognize the value of each of these important critical and deconstructive thinkers, they ultimately conclude that each of them “shy away from addressing the practical issues that policymakers face” (94).

As such, by calling organic Marxism a kind of constructive postmodernism, they affirm the need to offer concrete policy proposals that will be useful, not just for Leftist academics, but especially for “policymakers, government leaders, and lay people” (ix). This commitment leads Clayton and Heinzekehr to conclude the book with a series of practical ideas and specific policy guidelines on issues ranging from agriculture and manufacturing to banking, all with the aim of creating an ecological civilization. The perspective of Organic Marxism is ultimately a concrete commitment to the common good within an ecological framework that does not shy away from issues of class, race, or gender. It is a postmodern and critical appropriation of Marx’s revolutionary thought that is truly unique, although the authors note that it has some important connections, not only to Cobb’s work, but also to The New Materialism (Jane Bennett, Diana Coole, Clayton Crockett, Jeff Robbins, et al) and Environmental Marxism (Bellamy Foster).

Despite the intensely philosophical discussion throughout the text, Organic Marxism is a surprisingly accessible read that efficiently covers a lot of ground in economic and political theory. Readers will gain a valuable perspective on the history of capitalism, Marxism, process thought, and contemporary science. This is clearly the first book of its kind, and I’m thrilled to finally have a book that weaves together Whitehead and Marx. I believe that Clayton and Heinzekehr’s eco-socialist “manifesto of society for the common good” (ix) is a provocative, original, and exciting proposal that deserves a wide reading and deep discussion.

I am very grateful to the Center for Process Studies in Claremont, CA for sending me a review copy of this book. For more information, check out Philip Clayton’s overview of the book’s argument at Jesus, Jazz, and Buddhism.