On Thought Experiments: Two Ingredients for a theological dish 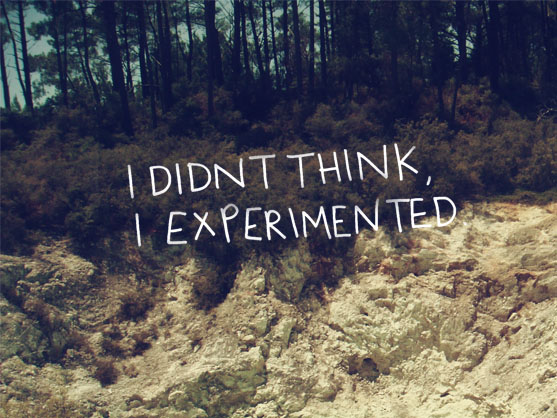 In the spirit of the Homebrewed mission, I’d like to share two ingredients that someone out there can take and make a tasty theological dish with.

Ingredient #1:
This interview with Yale Philosopher Keith DeRose. In it he basically says two things that caught my interest: 1) Neither atheists nor believers know (at all) whether God exists. I agree. 2) there’s still a good reason to take a stance on the issue. DeRose explains:

“Those who take a strong stand may most effectively develop and defend their position. I don’t think it would aid philosophy or politics if we all quickly abandoned our positions whenever we hit significant resistance from well-informed opponents. Often, that’s just when things get interesting.”

Ingredient #2:
I saw Harvard Philosopher Catherine Elgin speak last week (two great papers here by her: 1, 2). The thesis of her talk was that art, like science, embodies, conveys and advances understanding. She also talked a lot about exemplification and experiments. She made two interesting points on the subject of experiments:

1) Scientific experiments are “fictions,” or as she puts it “vehicles of exemplification. They do not purport to replicate what happens in the wild. Instead, they select, highlight, control and manipulate things so that features of interest are brought to the fore and their relevant characteristics and interactions made manifest…”

So, with these two ingredients I am confident that someone who is theologically inclined, for instance, could make a pretty persuasive case for engaging in metaphysical/speculative and/or theological thinking as a phenomenal way to advance ones understanding of the world. I mean, to be honest, I can’t think of a more robust and ambitious thought experiment than speculating on the nature of the Divine…