Concerns About ‘The’ Cross 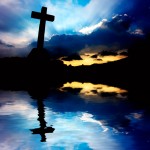 I want to thank all of you who shared, commented and emailed about this past weekend’s post on Blood: Easter, the Cross and that quote about Liberals.  I have received lots of feedback via email, FaceBook and text.

It seems that most people get the main thrust of the article but have one doubt/hesitation they can’t shake/make sense of. I was asked to write a response at a non-grad school level (which I love to do).

I have two requests:

So let’s get started!

There are several problems here.

First, there was more than one cross. There were three just in our Easter story (but not in most of our pictures – like the one to the right). So you can’t say ‘the’ cross. You can say ‘that’ cross. It is vital to get just how many crosses there were. Roman use of crosses was systemic. Jesus’ cross was not an exception in that way.

Second, you are using ‘the cross’ as a shorthand for the whole story. The incarnation, crucifixion, empty grave and pentecost provide a much better snapshot. To try and sum them up in ‘the cross’ is too limited.

Third, we are people of the resurrection. That does not mean that ‘the cross’ is a good thing. What happened there was unjust. That God redeemed it and brought something good out of it … does not change that it was tragic.

It seems like most of the things that we say about the cross are the first half of what should be a longer sentence.

“We preach the cross and Christ crucified” … yes but what do we preach about the cross?  That is was unjust? That ‘it is finished’ (the sacrificial system)?

“Jesus died our sins” …  yes but also because of our sin? And to what end? To move us away from the scapegoating impulse? To expose and unmask our unjust propensity toward violence?

Here is the problem: if we are not careful, we miss the radical reversal that Jesus’ cross is supposed to provide and we end up simply absorbing it into the system that it was meant to expose. This is a tragedy that ends up normalizing the violence Jesus unmasks and continues the cycle of victimization Jesus was trying to break.

Because of the way talk about the cross in half-sentences and short-hand phrases, we end up siding with the Romans’ use of power and violence and miss the fact that on Good Friday, God was not on the side of the Romans but that God was with Jesus on that cross.

I will withhold my real answer (that it was contextual and historically located) and will instead present what I think is a more helpful response!

We see a trajectory in our canon. God moves Abraham from human sacrifice to animal & grain … later God moves on from that system ( you see this in passages like Psalm 40:6 “sacrifice and offering you did not desire” and Hosea 6:6 “For I desire mercy, not sacrifice”)

People will often quote Hebrews 9:22 “without the shedding of blood there is no forgiveness of sins”. The half they leave out is that it actually says “under the law …”

You see what has happened? By not saying the first half (under the law) and only saying the second half, we actually miss the entire point of Jesus’ sacrifice and end up reinforcing the system Jesus came to move us on from!  We live and think as if we are still under the law!

The way talk and think about the cross of Christ actually undoes the very thing that Jesus came to do.

The rest of Hebrews 9 says that Jesus died once of all. So we don’t need to kill ‘them’ – they are ‘us’. We are all them – the all. Jesus died once for all so that we could stop this us-them thinking and stop victimizing and scapegoating. We miss this and then absorb ‘the cross of Christ‘ into the very system of power and violence that Jesus came to destroy.

Jesus forgave sins before the crucifixion. Part of the problem with saying ‘the cross’ as a form of shorthand for the whole story is that we skip both the life and teaching of Jesus. Jesus got in trouble for forgiving sins. How could he do that if what you are saying is true?

See? God forgives sin. How can God do that? Well if the debt that is owed is to God … then God can forgive them. The problem with they way we have been taught to think and talk about ‘the cross’ is that God is not free to forgive. God has to play by some external rules and ‘with out the shedding of blood, there is no forgiveness’. But remember that the law is that way. God is not.  Jesus, and this true wether you think Jesus was a messenger of God or God incarnate, forgave sins before the shedding of blood. How did he do that if they way were taught is true?

God forgives sins. Thank God! And we need to repent. We have made God into something Jesus was meant to destroy. We have placed God on the side of the powers and violence that God was trying to combat. We have returned to the very thing God was attempting to redeem us from and release us from. We have absorbed Jesus’ cross into the very system Jesus was attempting to unmask and expose. We have missed the very lesson that Easter is supposed to teach us.

I will contend that God was with Jesus on that cross and that the empty grave is the vindication of the victim so that we might be freed from the cycle of violence and victimization … once for all.

I look forward to your ongoing feedback and I will try to respond throughout the day to any honest questions that come up.