Noah: Eclipse of the Biblical Narrative 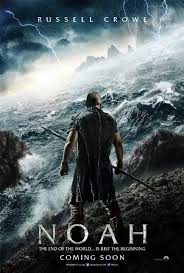 The new Noah movie is a masterful work of biblical imagination and creativity. You can listen to a review of the movie and interview with the director and screenwriter here.

There are two aspects of the movie that audiences will notice up-front:

The latter is significant for the former. Through a creative move to put the animals into hibernation, all of the questions about how you would feed that many animals, keep them from killing each other, and shoveling manure are instantly relieved. Those who are concerned about such logistical matter can then relax and settle into the narrative.

This is important because for many viewers, the story of Noah is either a) a children’s tale or b) a physics/apologetics problem.

What is missed in both the children’s story and the apologetics arguments is that we are dealing with an epic-mythic-primal narrative. It is not a newspaper account of the flood.

The danger of reducing epic-mythic-primal narrative down to newspaper reports is that too much is lost in the reductive move. The sad part is that often those who are the most series about the biblical account – and who may be upset about the creative flourishes in this movie – have often fallen victim to a debilitating loss of wonder and possibility.

This is a ‘Failure of Imagination’.

When the Biblical Narrative is reduced down to a newspaper report,  the account lacks the appropriate level of animation.

Aronofsky illustrates how a story should inspire us. This is how we should entertain and engage a Biblical narrative – not by simplifying it down to a flannel board representation – but by breathing more life into it to see what emerges.

In the interview you will hear Aronofsky and Ari Handel say that they wanted to ‘humanize and dramatize’ this work of ‘primal story telling’. My mind went immediately to the work of Hans Frei – specifically The Eclipse of the Biblical Narrative. Frei was both concerned about and critical of the shifts that happened in recent centuries of biblical criticism. We had clearly moved out of the pre-modern (pre-critical) way of addressing a sacred text and into (via the enlightenment) a flood of critical thought and scholarly criticism.

Both the fundamentalist retreat to historical facts and the liberal abandonment of historical concerns are a failure to Frei. This is not about extracting universals or proving ‘facts.’ That is an exercise in missing the point.

Frie’s proposal related to fitting our world into the world of the Bible.  While I don’t subscribe to Frie’s system wholesale, I think that he would be very impressed by Aranofsky’s vision for the Noah story.

The director lets us inhabit the enchanted world of Noah and tries to find elements of our world within it. This is the beautiful opportunity provided for us through film. We breath creativity and imagination into the text and let it come alive.*

Tomorrow we will look at ReEnchanting the world the Noah inhabited.

*It is important to note that Aronofsky and Handel took great pride in not contradicting a single detail in the biblical account. They admittedly added and embellished other aspects of the story.