Jihad v. McWorld: How We Imagine A Nation part 4 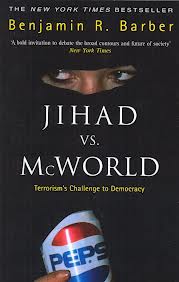 In the previous 3 parts we established that a significant shift took place in the late 19th and early 20th century. This initial shift in modernity has subsequently created the possibility of a second, more contemporary, move that I want to explore. Taylor provides the context of this potential when he says:

In earlier societies, this ability to imagine the self outside of a particular context extended to membership of that society in its essential order. That this is no longer so with us, that many of these … questions are not only conceivable but arise as burning practical issues … is the measure of our disembedding. Another fruit of this is our ability to entertain the abstract question even where we cannot make it imaginatively real.[6]

It is in this potential that citizens of the 21st century already have, or likely will, move beyond national identities to something more potentially abstract, disembodied, plural and wrapped in multiplicity. Issues of citizenship, sexuality, race, ethnicity and religion are increasingly complex in an inter-racial, cross-cultural and multi-national globalized context.

Tomorrow’s posts will explore works by Kwame Anthony Appaih, Arjun Appadurai, Umberto Eco and Madan Sarup. Then we will address thoughts by Jean Buildrillard and Saba Mahmood as they relate to imaginaries and conceptions of community, the physical body and spirituality.

In a section entitled ‘Global Villages’, Appiah points out that,

This is the same tension that was developed in the earlier section between secular and religious thought. Each sees the other as both the problem and a threat to their program – not realizing that in another sense, they actually give rise to each other and propagate each other’s reach.

It is addressed again in such examinations as Jihad v. McWorld: How Globalism and Tribalism are Reshaping the World by Benjamin J. Barber.  Forces that seem to be in conflict with each other are, in reality, dependant on each other in a complex interplay. Barber explains:

McWorld cannot then do without Jihad: it needs cultural parochialism to feed its endless appetites. Yet neither can Jihad do without McWorld: for where would culture be without commercial producers who market it and the information and communication systems that make it known?[8]

The complexity of the combative nature of the symbiotic relationship is found in the evolving nature of the situation.  Barber’s pairing of the phrases ‘Jihad’ with it’s perceived nemesis with ‘McWorld’ is deliberate.

What I have called the forces of Jihad may seem then to be a throwback to pre-modern times: an attempt to recapture a world that existed prior to cosmopolitan capitalism and was defined by religious mysteries, hierarchical communities, spellbinding traditions, and historical torpor… Jihad is not only McWorld’s adversary, it is its child. The two are then thus locked together in a kind of Freudian moment of the ongoing cultural struggle, neither willing to coexist with the other, neither complete without the other.[9]

This juxtaposition is even more precarious than a simple ‘clash’ or ‘combat’ language would seem to provide. There is obviously an adversarial component but without addressing how McWorld gave rise to Jihad – and how Western constructs of religion gave rise to secularism – there is a falsity that exist for those who participate in the inflammatory dualism on both sides (as if there were only two). Conceiving of one’s identity within this fictitious and fracturous is layered in complications related to the imaginary employed.

An outgrowth of this increasing complexity is, as Appiah describes it, a “distinctively cosmopolitan commitment to pluralism”.[10] Cosmopolitan people know that we are different than each other – this is apparent at every turn – and they recognize that we have much to learn from our differences.[11] One theme that emerges repeatedly in the work of these authors is the centrality and role of media. Benedict Anderson addressed it through the textual nature of transmission that united disconnected people in the imaginary.

What Anderson coined as ‘print capitalism’ created permanent change in the way people conceived of their personhood and selfhood. Its power was housed in the dual developments of mass literacy coupled with technological innovation that allowed for ‘large-scale production of projects’.  The result was release from the need for face-to-face communication or even indirect connection between people or groups.[12]

You can see how, in these 4 posts, we live in a very different world than the one we have inhereted in our religious traditions. This helps to explain the baffling disconnect that can occur between our ancient documents and their ongoing implementation in our contemporary religious expressions.

In part 5 we begin to explore the lived and embodied implications of religion in the modern-contemporary context.

[11] Appiah earlier broke down the intertwined notion of cosmopolitanism into two threads: the first is that our obligation extends beyond ties of family and kind (even citizenship) to those outside our immediate reach. The second thread finds value not just in human lives generically but in particular human lives. This is the loci for enlightenment liberal individualism. Ibid., xv.

[12] Arjun Appadurai, Modernity At Large: Cultural Dimensions of Globalization (U of Minnesota Press, 1996), 28.