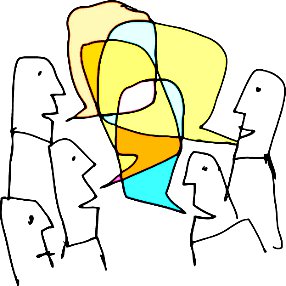 Not long ago, I read a lively discussion among a group of fellow writers on the interpretation of Scripture and who has earned to right to explain the meaning and original context for the Bible. Two of them suggested that theological discourse must begin with specific courses of study, including language; the third disagreed. I found myself feeling uncomfortable as I scrolled through the conversation, for a number of reasons.

First, I don’t entirely disagree. My education and experience are in nursing and health science, with an emphasis on women’s and children’s wellness. It always makes me roll my eyes at least a little whenever someone tries to educate me on those topics, particularly when that person’s entire knowledge base seems to derive from either WebMD or conspiracy-theory channels. It can be just as frustrating to have a rational discussion about health as it is about the Bible for a lot of the same reasons. I can identify with believing that one should be thoroughly educated, preferably from an accredited school of [insert your area of expertise], before attempting to debate the finer points. In that sense, I recognize that I’ve been guilty of PWAD—Philosophizing without a Degree—and that makes me feel awkward.

Second, I immediately recognized something suspicious about these bloggers—they are all white men. These are people who have the luxury of not needing to defend themselves. Even women who have been to seminary often find themselves ignored or disrespected, or they have their credentials questioned whenever they offer an opinion. Among those of us who have not earned advanced degrees, most people are more likely to listen to men on matters of theology—as though we women don’t have any idea how to research a particular topic and are just making things up as we go along (or as though our entire theology is built on the concept of “story”). Some months ago, a well-known progressive Christian tweeted to me that he never reads women on matters of feminism or theology, because these women are still steeped in patriarchy and aren’t progressive enough. He refused to acknowledge that women might, in fact, be experts on women and that by ignoring us he was doing the very thing he claimed to be avoiding. In fairness, he isn’t entirely wrong; white feminist theology is fraught with problems. His solution, however—to only read the writings of men on feminism and feminist theology—is misguided at best and misogynistic at worst. The only time I’ve ever felt more marginalized was in a conservative evangelical church, and even there, at least I knew what to expect. I appreciate what these men are trying to do—bring dignity to writing on Scripture—but they shouldn’t make proclamations about who has the right without thinking deeply about what that means for people who have been underrepresented in pastoral ministry and how it comes across when white men try to interpret Scripture that addresses the personhood of people who are not they.

Third, I’m not convinced that merely having an education (or knowing Hebrew and Greek or having taken courses in Biblical Studies) is a fair way to give the stamp of approval for theological discourse. There are still plenty of pastors who make grave errors in interpretation regardless of their study. How many times in the last month alone have well-known preachers made foolish doctrinal statements? How many of us have left fundamentalist religion because we regularly heard sermons in which people were marginalized or shamed? Those pastors would likely all claim that any other reading of the text is faulty, just as more progressive pastors and theologians might claim their reading is the right one. In fact, those are two sides of the same coin; both stem from a desire to find the one, true meaning of each and every verse of the Bible. Knowledge of Greek and Hebrew, and even understanding cultural context, may or may not lead to better interpretation. Instead, education becomes a weapon for both sides to use against one another—and the casualties are those of us who dwell outside those intellectual debates, most of whom just want to know how to love God and serve others.

Theology and interpretation of the Bible are important for those of us who have to navigate the divide between the teachings of the church and our study and experience of the real world. I’ve spent the better part of twenty years trying to figure out how to reconcile what I know about human anatomy, physiology, and sexuality with what the church has taught. For those of us outside the ivory tower, theology is not about needing to find the best rendering of a specific word in the Hebrew Bible or the social constructs leading to Paul’s invented phraseology. It doesn’t exist only in the spaces where one investigates the theories of atonement and weighs them against one another. Instead, it lives in the place where I need the words to explain why a certain reading of the text does more to promote than to prevent damage. I need to be able to talk about theology because it matters that my mind and my soul be united, especially when caring for people the church has ignored, shamed, and marginalized.

A better way to handle discussions about heavy topics is to extend trust to one another. Those of us in the trenches of human existence have become fearful of anyone we see as part of “the institution” of whatever we happen to dislike at the moment. It’s easy to fear pastors, just like it’s easy to fear teachers or doctors. Those of us who are or have been part of an institution may feel defensive about our position within that community and wish to hang on to our authority. It’s like Thanksgiving dinner—we tend to divide ourselves, seating one group at the adults’ table in the dining room and relegating the other to the kids’ table in the kitchen. What if now and again we all just took our plates and hung out in the living room together?

So what do you think? Can we have a conversation about what the Scriptures mean without degrees and language study? Or are we better off leaving it to the experts?

Amy Mitchell is a  family woman, feminist, LGBT ally, reader, writer, and nerd. She considers herself a progressive Christian, even if that does sometimes earn her the side-eye from both directions.  She likes to poke holes in conservative Christian culture and theology, but she requires copious amounts of caffeine to do it effectively.  She can be found blogging at http://www.unchainedfaith.com