The Problem With The New Pope

Home / engaging / The Problem With The New Pope 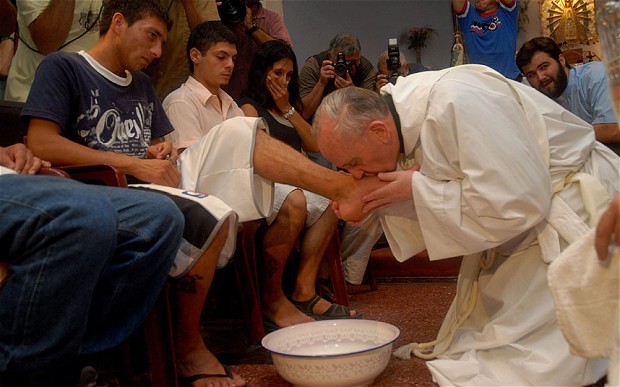 It has been amazing to watch both the amount of reporting and the kind of reporting that  Pope Francis’ style has drawn. You can find stories about him in major magazines, on every news website … even the Daily Show gave some hilarious attention to the hype.

I was on an Australian radio show the day of his election – they liked the angle that I had taken on my blog focusing on the Southern hemisphere. [I will put the 4 minute clip at the bottom of this post] I was on after the Australian Ambassador from Argentina.

Some of my co-workers are Catholic and Pope Francis’ dealing provide us with every-other-day content for our coffee-pot conversations. Even my wife, who is generally not that interested in such things, is into it.

She asked me, on a recent road trip after several news stories, why I thought people were so into Francis.  I have three thoughts and would love to hear other’s thoughts.

I know that not every Catholic listens to the Pope and that the Pope does not influence every thing … but it is still a big deal.

Francis’ style is not just a breath of fresh air – it is substantially different. What he did on Maundy Thursday was not just a ‘break with tradition’, as reports kept repeating, but was significant. Washing & kissing prisoner’s feet instead of priest’s is not window dressing

It’s like we are enamored with the figure-head of the thing we left so long ago. I chalk it up to some sort of fetish thing for regal gowns, bejeweled crowns and antiquated (and sometimes secret) ceremonies.

There is one problem though. Protestants seem to want the Pope to be more protestant.

Almost all of the critique or concern I heard about him is something that would be more emblematic of protestant values or approaches. He is following the church’s traditional stance on (just to name 4):

“Of course he is – otherwise he wouldn’t have been elected Pope”.

It feels to me like somebody saying “I like the new Miss USA … I just wish she was built like a Linebacker in football.”   Well … I hate to break it to you but that’s not going to happen. In fact, people who are built to play linebackers don’t make it to the Miss USA pageant. That is just not what the judges are looking for.

What I wish we would instead focus on is his economic dealings, immigration issues (he is the son of immigrants) and out-reach to non-Europeans. I continue to claim that just those 3 will make this a game-changer.

I would love to hear your thoughts.