A Pope from the Southern Hemisphere! This is a game-changer

Home / thinking / church history / A Pope from the Southern Hemisphere! This is a game-changer 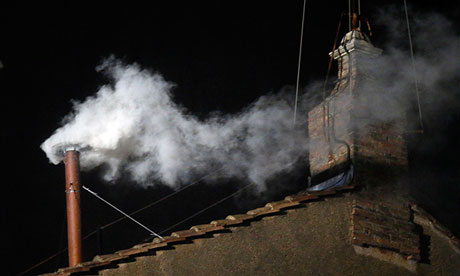 For those of us from missionary backgrounds, we have saying (myself for almost 2 decades) that  when the Catholic Church elects a pope from the Southern Hemisphere – S. America, Africa, Asia, or Islands – that is would be a game changer.

Well that has happened.

Cardinal Bergoglio of Argentina will be known as Pope Francis and it is nearly impossible to overstate how monumental this is.

You don’t have to be Catholic. You can think that the white smoke and all the pomp & circumstance is a bunch of hooey. You can roll your eyes and some of the superstitious or antiquated elements of the various varieties of global expressions.

What you can not do is ignore how important this is.

In his 2007 book The Next Christendom: The Coming of Global Christianity, Philip Jenkins talked not only about the rise of Pentecostalism is the Southern Hemisphere but the importance of the unique Catholic expressions and hybrids as well.

Read any book about globalization and you will see how much this is going to matter in the inter-connected, trans-national, multi-cultural 21st century.

This is the primary reason that even as I have transitioned to working at a Mainline church, attending a Liberal school, and adopting Process theology as my main conversation partner … I have continued to carry the banner of Pentecostal-Charismatic expressions of the church and to have post-colonial studies as one of my cognate fields for my PhD.

I take this stuff seriously and I am under the impression that you should too.

Since the Second Vatican Council in the early 1960’s the Catholic church has undergone many serious changes. The sex abuse scandals of the past decades have been crippling – especially in the North Atlantic countries of Europe and N. America.

I am not saying that this one change fixes all that. That would be silly. What I am saying that is a non-white face, from South of the equator, speaking Spanish … it is going to be big.

I have been asked several times in the last month what my opinion of the Pope change was. I have repeatedly said:

Unless they elect a Pope from the Southern Hemisphere, I have nothing to say.

We they did, and now I do.  I will write more this weekend after I turn in my massive paper due Friday.

I would love to hear your thoughts.