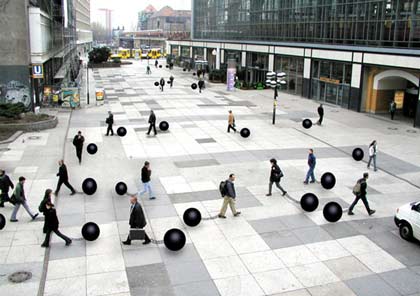 I’m almost done reading The Secret History of the American Empire by John Perkins. The subtitle is “The Truth About Economic Hit Men, Jackals, and How to Change the World”.

It is the follow up to his first book Confessions of an Economic Hitman.  He details how global corporations, American foreign policy and military – along with Non-Goverment Organizations (NGOs) – pull the string around the world. It is a fascinating look at how money really changes hands, gives directions to both politics and news, and effects everything that we think, touch, buy, see and believe.

It has me thinking.

Last year we were chatting with Tony Jones about his book A Better Atonement.  He asked Tripp and I what the theology nerds had been reading and we told him that we were really excited about the book that Joerg Reiger, written with Nestor Miguez and Jung Mo Sung,  had put out “Beyond the Spirit of Empire” was challenging us.

Tony’s response was that he was kind of tired of all the empire talk. We were surprised.

I have thought about that aspect of our conversation more than any other. So I wanted to throw out this segment from Perkins’ book in order to set up something that I want to talk about next week.

Empire. It has been bandied about in the press and classrooms and at local pubs for the last few years. But what exactly is an empire?

Empire: nation-state that dominates other nation-states and exhibits one or more of the following characteristics:

1) exploits resources from the lands it dominates,
2) consumes large quantities of resources—amounts that are disproportionate to the size of its population relative to those of other nations,
3) maintains a large military that enforces its policies when more subtle measures fail,
4) spreads its language, literature, art, and various aspects of its culture throughout its sphere of influence,
5) taxes not just its own citizens, but also people in other countries, and
6) imposes its own currency on the lands under its control.

That is the part that I want to talk about. Since I will be leaving this up over the weekend while I am attending to other things, I thought it would also be good to post some of what he does with it.

Addressing each of the above points:
Points 1 and 2. The United States represents less than 5 percent of the world’s population; it consumes more than 25 percent of the world’s resources. This is accomplished to a large degree through the exploitation of other countries, primarily in the developing world.
Point 3. The United States maintains the largest and most sophisticated military in the world. Although this empire has been built primarily through economics—by EHMs—world leaders understand that whenever other measures fail, the military will step in, as it did in Iraq.
Point 4. The English language and American culture dominate the world.
Points 5 and 6. Although the United States does not tax countries directly, and the dollar has not replaced other currencies in local markets, the corporatocracy does impose a subtle global tax and the dollar is in fact the standard currency for world commerce.
This process began at the end of World War II when the gold standard was modified; dollars could no longer be converted by individuals, only by governments. During the 1950s and 1960s, credit purchases were made abroad to finance America’s growing consumerism, the Korean and Vietnam Wars, and Lyndon B. Johnson’s Great Society. When foreign businessmen tried to buy goods and services back from the United States, they found that inflation had reduced the value of their dollars—in effect, they paid an indirect tax. Their governments demanded debt settlements in gold. On August 15, 1971, the Nixon administration refused and dropped the gold standard altogether.

I am not primarily as interested in that, per se, but I know that is where many people’s minds will go so I thought I would include it.
I would be interested in your thoughts on the subject.
How does the topic of ’empire’ sit with you and if I were to address it, what would be your hesitations.