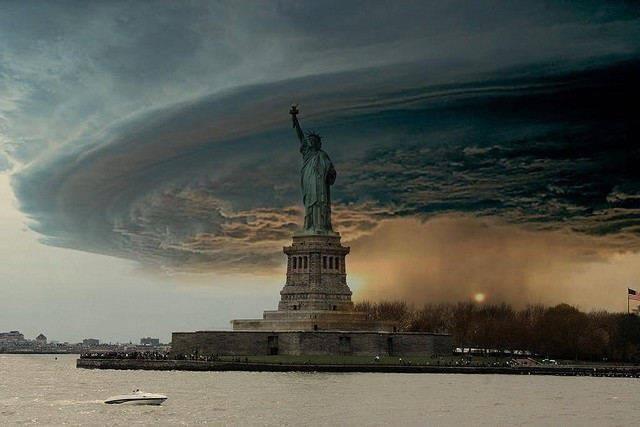 So it has begun. Hurricane Sandy is only one day in to its battering of the East and the religious have weighed in.  I will warn you – it’s not good.

I was introduced to this photo by a worker at our facility today (who listens religiously to the Howard Stern show) and I was immediately  suspicious of both the sunshine in the foreground and the speed boat that looks oddly mis-sized.

I thought it humorous until that afternoon when I logged onto Facebook and notices that it had already been shared by hundreds of  people. What really caught my attention, though, was a response in the form of a prayer.

My friend had stated in the captions to the photo: “This is an amazing shot of New York today with the Frankenstorm bearing down. Nature is so powerful, yet so beautiful.”   I thought “someone should tell him that it’s a fake”.  Before I could, someone else had offered this response:

Father, all the elements of nature obey your command. Calm the storms and hurricanes that threaten us and turn our fear of your power into praise of your goodness. Grant this through our Lord Jesus Christ, Your Son, who lives and reigns with you and the Holy Spirit, one God, forever and ever. Amen.

I was stunned. There are so many elements of this ‘prayer’ that concern me. I was filled with questions. Perhaps the biggest one was : Is there a god who hears these kind of prayers?

This past Sunday at the Loft LA I had preached a sermon called ‘Why Pray?’ about this exact type of thing … so my attention was immediately piqued.

On a side note – I especially appreciated that just hours later this fake meme showed up in the twitter-verse.

I am deeply concerned about people who think that their prayers can command whole weather patterns. This concern is primarily at two levels.

This kind of stuff really pulls at me as an emerging evangelical-charismatic.  I was prepared to let the whole thing go when this showed up on the wire:

A Christian religious leader has already claimed that Hurricane Sandy is further proof that “God is systematically destroying America” as political judgment for the “homosexual agenda.” John McTernan previously made similar allusions about Hurricanes Katrina (2005) and Isaac (2012), which he reiterated in his urgent call to prayer posted Sunday evening (via Gay Star News):

McTernan believes that it is noteworthy that Hurricane Sandy is hitting 21 years after the “Perfect Storm,” because 3 is a “significant number with God”:

Twenty-one years breaks down to 7 x 3, which is a significant number with God. Three is perfection as the Godhead is three in one while seven is perfection.

It appears that God gave America 21 years to repent of interfering with His prophetic plan for Israel; however, it has gotten worse under all the presidents and especially Obama. Obama is 100 percent behind the Muslim Brotherhood which has vowed to destroy Israel and take Jerusalem. Both candidates are pro-homosexual and are behind the homosexual agenda. America is under political judgment and the church does not know it!

Religious spokespeople have frequently tried to draw bizarre connections between natural disasters and the LGBT community. Last year, the American Family Association’s Buster Wilson similarly claimed that Hurricane Isaac was punishment for the Southern Decadence LGBT festival. Rick Joyner had the same to say about Hurricane Katrina, claiming that “[God]‘s not gonna put up with perversion anymore.” Pat Robertson has long believed that acceptance of homosexuality could result in hurricanes, earthquakes, tornadoes, terrorist bombs, and “possibly a meteor.”

It’s likely that McTernan will not be the only religious figure to draw such allusions from this devastating storm.

One anti-gay (former lesbian) activist actually targeted  the state of Vermont as a litmus test of who her god was mad at. I loved the first comment on the post:

Considering that Lower Manhattan is troublingly at risk, I say there’s a good chance it’s Jesus cleaning up Wall Street – a modern-day version of when He cleared the moneychangers out of the Temple…

As funny as that last comment may be, I am not amused – because it concedes the rules of the game to the antiquated notions of centuries past and abdicates the metaphysical realities of 21st century life to the … let’s just say – the conceptions of bygone eras.

I am concerned that the fakeness of the pictures and posts we respond to correspond to our notion of reality and our conception of how the world works … and thus how our prayers are effective.