An Evangelical Support for Same-Sex Marriage 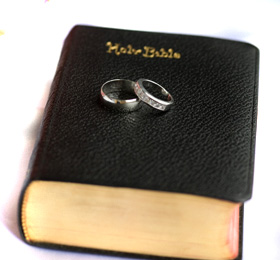 conversation in a way that does not require them to disregard the Bible that they so value. I will do this as directly and effectively as I can without being dismissive. If I am too brief in some aspect, please let me know which element you would like to have elaborated. This is an emotionally charged issue for folks on both sides and I am trying to be as irenic as possible.

Preface: As Evangelicals we hold that the Bible as the inspired written word of God. It points us to the Incarnate Word of God (Jesus) and becomes living and active when it is read or proclaimed as the ‘declared’ word of God when preached under the influence of Holy Spirit power. (Some specialized groups will want to say ‘inerrant’ or ‘infallible’ instead of inspired but I stick with inspired since it has the greatest level of agreement.)

The thought process for a new approach to same-sex unions centers around three things:

The Old Testament: Christians are not bound to the ‘law’ and follow almost none of the rules found in the Hebrew testament. Romans 10:4 says that Christ is the end of the law  for all who believe and the Christian scriptures say that Christ abolished the law (Ephesians 2:15), fulfilled the law (Romans 10:4 & Matthew 5:17) and made it obsolete (Hebrews 8:13).  We can’t quote any of the Old Testament ‘clobber’ passages on this issue. While the Old Testament is an inspired record containing the word of God, Christians have been set free and no longer live by that law (see the book of Acts 10-15).

The New Testament: Paul did not write in a vacuum. He wrote in the context of the Roman empire – both in reaction to and correction of. Central to the Roman code was something called the Pater familias. The ‘dad’ (land owner) in a Roman family basically ‘owned’ everyone else (including wife and kids) and could do whatever they wanted (including sexually) with them. There was also a practice of men going to war taking a young ‘armor bearer’ (or companion) who they could use sexually. What verses like Romans 1 are against is something that everyone – no matter where they are on our current issue – would still be against.

We don’t live by the Old Testament. The New Testament is talking about something we would all still be against. The Bible is not talking about the same thing that we are debating, it didn’t exist. To drag our ‘homosexuality’ into the pages of the Bible is anachronistic (out of time sequence).

Sexual identity/orientation is something we have to talk about in light of scripture’s teaching, but we can’t simply import our English words and concepts into the original text and assume that it is addressing the same things we are wrestling with.*

So there it is -as simply as I can state it. I have found this three-pronged approach to be a good first entry into the conversation. From there I would talk about the trajectory of liberation found in the New Testament, or the hermeneutical approach that allows us to navigate the sayings in the Bible about divorce in our contemporary churches (we clearly have the ability to navigate that sort of challenge.)

I hope this will be helpful or at least informative of one approach to addressing support for same-sex unions.

* I know that some who are more progressive are going to say “even if it was – so what? The Bible was wrong on slavery and it is wrong on this too!”. Can I just kindly say that this post is not intended for you and that it is great that you already have your conviction and if you could just let us slow-pokes have this little conversation in our own terms, that would be really helpful.

So Lynette came on and answered the question that so many had been asking for 2 days and I had only attempted to answer:

The term “arsenokoites” in Paul’s writing and the term “homosexual” today don’t really map to each other very well.

Arsenokoites was even used in reference to married, opposite-sex relationships in the early church (See John the Faster’s “Many men commit the sin of arsenokoitia with their wives.”). Arsenokoites would appear to mean “A man who takes sexual advantage of those under his authority, including male slaves (his own and those belonging to pagan temples), sons, pupils, and prisoners of war”.
Whereas homosexual means a person, male or female, who is romantically, relationally, and sexual attracted primarily to those of his or her own sex or gender, and therefore is likely to seek romantic partnerships and sexual relationships with his or her own sex or gender (though one can be celibate and still be homosexual).
They don’t map very well together. In Paul’s world, sex was largely a matter of power relationships– a man acquired a wife, a slave, a prostitute, a child, etc. and could, as part of his authority gratify sexual desires with those under him.
Today’s relationships are largely based on love, partnership, companionship, not property and authority. Therefore, what Paul writes has to be understood through the lens of his own time and not through our own lens.

The amazing amount of comments has exceeded the program’s ability to display them all on the same page.  So I am moving some very helpful comments up into the original post so that we can all find them as the conversation progresses.

From JDS: For an extended discussion of the word “arsenokoitai,” please see: http://www.religioustolerance.org/homarsen.htm. (This site is excellent for presenting multiple interpretations of the Bible’s references to homosexuality). The word has been translated various ways over the years, but the translation as homosexual does not appear until the last couple hundred years.
Again: the term “homosexuality” has no record before about 1800 (and is very rare until later in the 19th century). “Arsenokoitai” also (as far as we can tell) does not refer to lesbianism, fwiw, but only some kind of male sexual practice (Martin Luther thought it meant self-abuse, apparently).

The upshot is that Paul does NOT use the very common Greek term “paiderasste,” which was what the Greeks used to refer to male-male sex. Instead, he uses this other term of more obscure origin.