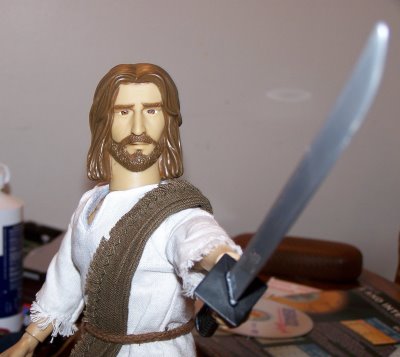 Jesus tells his disciples to sell their bags and buy swords. Why? And why then does he reprimand Peter for using a blade at the moment when it seemed to be most appropriate?  Was Jesus being inconsistent? Did he change his mind in the moment? Was it a test? Did he set Peter up to fail? Why did he say that ‘those who live by the sword, will die by the sword?’ and then tell his disciple to buy them?

I am asked about Jesus’ relationship to swords as much as anything I get asked about. Good hearted people are quite baffled by the whole subject.

As a former apologist, I have gotten pretty good at helping the baffled work through these passages. I even has a presentation I do called jesuSword that incorporates Jesus, his words, and these passages about swords.

In order to facilitate a lively give and take, we will take this in 3 quick addresses over the next 24 hours.

Part 1: Jesus says that he came to bring a sword.

Is it possible that Jesus was being ironic and that his sword is actually an un-sword. I say this because Jesus’ sword does the exact opposite thing that normal swords do. His sword divides family. Traditional swords are used their swords to defend their kin and kind.

Jesus was using a play on words.

Jesus was using hyperbole. In his day swords were actually for defending one’s family – for guarding me and mine. In this sense, Jesus’ “sword” is an un-sword… or an anti-sword. It does the opposite of what human swords are used for.  Jesus’ sword is not for defending family but for dividing family. Jesus did not come with a human sword but the opposite!!

John Caputo puts it this way:

The kingdom reigns wherever the least and most undesirable are favored while the best and most powerful are put on the defensive. The powerless power of the kingdom prevails whenever the one is preferred to the ninety-nine, whenever one loves one’s enemies and hates one’s father and mother while the world, which believes in power, counsels us to fend off our enemies and keep the circle of kin and kind, of family and friends, fortified and tightly drawn.”

If Jesus was being ironic or using hyperbole, it would make so much more sense than the way this passage gets used to justify violence and militarism.

I would love to hear your thoughts – I just have one request: please don’t use the word ‘Pacifist’ when speaking of Jesus. That set of commitments belongs to a distinct school of thought  that did not exist in Jesus day so it is anachronistic to use in that way. He was certainly into non-violence and radical peace-making but Pacifism is a unique configuration of convictions.

There are lots of swords in the New Testament.  The Word of God is compared to a double-edged sword and Jesus comes back wielding a sword. Maybe the Bible is more than ‘O.K.’ with swords and sword imagery?

Let me throw out two things:

Some people dismiss statements like this and chalk it up to testosterone fueled, overly inflated, pumped up hyper-masculinity.  I worry that there is something much deeper and much more sinister involved. I think that it is a fundamental misunderstanding of the nature of God and the interpretation of Christian scripture.

What is noteworthy in Revelation 19, is that the sword is not in Jesus’ hand but it comes out of Jesus’ mouth. That seems important in the poetic/prophetic  nature of Revelation. This sword is not your average sword. It is not in Jesus’ hand and that makes you wonder if the way in which this sword “strike down” the nations is not in bloody violence but in a kind of destruction that would happen as a result of a sword that proceeds from the mouth of God?  Let’s ask ourselves “is there something that comes from the mouth of God that radically impacts or consumes peoples and nations?”  Is there something sharp that comes from the mouth of God … something sharper than any two edged sword?

12 For the word of God is alive and active. Sharper than any double-edged sword, it penetrates even to dividing soul and spirit, joints and marrow; it judges the thoughts and attitudes of the heart.

So far so good! ‘It’ judges the thoughts and heart… but here comes the twist:

13 Nothing in all creation is hidden from His sight. Everything is uncovered and laid bare before the eyes of him to whom we must give account.

14 Therefore, since we have a great high priest who has ascended into heaven, Jesus the Son of God, let us hold firmly to the faith we profess.

Jesus is the Word of God?    (I’m being funny but you may want to check out John 1 for clarification).

In conclusion: the use of sword imagery  in both Revelation and in the book of Hebrews needs to be taken with a poetic grain of salt. Yes, the Bible uses sword imagery. The thing is that if Jesus’ (S)word, from part 1,  is a non-sword or an un-sword and in Revelation is comes from Jesus’ mouth and in Hebrews it is a person … then none of these passages, thus far, can be utilized to justify what so many Christian (s)words are used for.

I’ve obviously been having fun here, but the bottom line is that just because the Bible uses swords as analogies – it isn’t a wholesale validation of swords nor a justification for using them as the world does.

Part 3:  Jesus tells his disciple to buy a sword?

We come to that famous passage in Luke 22 where Jesus tells his disciples to buy a sword.

35 Then Jesus asked them, “When I sent you without purse, bag or sandals, did you lack anything?”

36 He said to them, “But now if you have a purse, take it, and also a bag; and if you don’t have a sword, sell your cloak and buy one. 37 It is written: ‘And he was numbered with the transgressors’[b]; and I tell you that this must be fulfilled in me. Yes, what is written about me is reaching its fulfillment.”

Here are two readings you may want to consider:

Earlier this week I engaged a political reading of Moses and the waters of Meribah from Numbers 20. My question was “why, if Moses was going to ultimately speak to the rock, did the Lord even mention the staff?”  The answer was that it was a symbol of power to be carried – yes – but ultimately resisted in favor of a better present option that might be overshadowed by the most obvious option.

It takes strength to turn the other cheek. If you don’t have the ability to retaliate … it is just being a doormat or victim? That is how I have always thought about it.

In that perspective, I have read Jesus’ odd command with Peter in mind. I see that fateful night where Jesus tells him to ‘put away your sword’ and later tells the authorities ‘if my kingdom was of this world my followers would fight.’ The implication is that Jesus’ kingdom is not of this world and so his followers don’t fight.

The sword for the disciple, then, is what the staff was for Moses in Numbers  20: a powerful option to be resisted in favor of a preferable option that is less obvious because it is less forceful.

I used to reconcile ‘buying swords’ as a sort of object lesson or training excersise for the disciples. One lesson (trust and supply) is over – next lesson: You can’t resist temptation is one of the options is not even available.

Then, in 2007, I discovered that Biblical Scholars have a different way of handling the passage. Here is Ben Witherington:

Lk. 22.36-38. What is the meaning of this little story, taking into account the larger context of Jesus’ teaching? Vs. 37 is the key where Jesus quotes Is. 53.12—“he was numbered with the transgressors”. Jesus is saying to the disciples—you must fulfill your role as transgressors of what I have taught you!!! They must play the part of those who do exactly the opposite of what Jesus taught them in the Sermon on the Mount. The disciples become transgressors by seeking out weapons and then seeking to use them. This much is perfectly clear from the context for the disciples then go on to say “look Lord here is two swords”. They already have such weapons and Jesus responds in disgust to the fact that they are already transgressing his principles of non-violence by responding “that’s enough” (of this nonsense).

So either Jesus was saying that two swords was enough for the revolution (not likely) or Witherington has this right.

Conclusion: We have looked at these four famous passages now and it seems clear that although Jesus talked about swords and the writers of scripture utilized sword analogies, none of these passages is a validation of the type of violence these verses are used to justify.