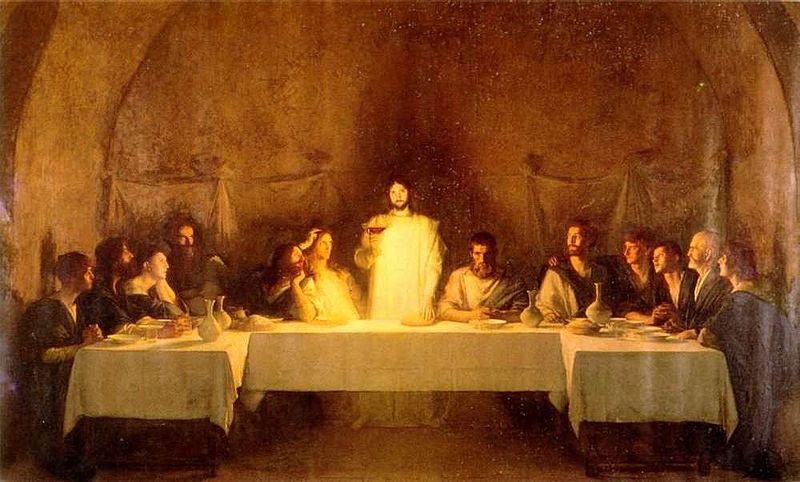 I’ve been happy to reflect, as of late, on the notion of communion, its proper place and its meaning. The institution is an interesting one. A sacrament and material means for the communication of God’s grace and God’s covenant to be a God who loves us unconditionally, communion has come to be historically expressed through the ceremony of Eucharist, the norm of which is supposedly handed down by Christ to us directly. In my own church, the Episcopal Church, we have a special celebration and ceremony for the Eucharist immediately after our Rite, a fact that we at least share in common with Roman Catholic Christians, if not a number of other faith-expressions. Here, the priest breaks the bread as a symbol of Christ’s broken body, eats and drinks for him or herself, and then shares the body with the rest of the congregation. It is a fine ceremony and one that I have enjoyed immensely during my time as an Episcopalian. However, for all its pomp, I am not convinced that this is either the time or place where, so to say, the sacrament is actually obtained.

I say this because, after our services, we have a Fellowship Hour, one in which a member or several members of the congregation more or less provide lunch. All are welcome to eat with us. There is a donation plate, too, but no money is required. We share food with one another freely and without contempt. After dishing up, we sit together, talk, laugh, and enjoy one another’s company, sometimes listening to a speaker but mostly (thankfully) just chatting. We then help clean up and go on our merry way hopefully carrying with us the renewed love obtained.

I will not pretend to be an expert in early church doctrine or ritual practice, and I am not one to say that we need to go back to the way things were at the beginning. That’s never possible, in my humble opinion. Perhaps, however, there is something to be said for the love feasts that were more or less at least part of the early Church’s interpretation of communion. It was not Eucharist as we now celebrate it, but it was the institution emerged from Christ’s command to eat his body and drink his blood. It was, in fact, the institution that the early Christian apologists defend against their Roman accusers (who often thought of it as on par with certain sexually explicit and cannibalistic cult rituals). These are the same feasts, that is, about which Paul excoriates the Corinthians for drawing class distinctions, saving the good portions of food for the wealthy and serving the lesser to the poor.

In this same regard, I believe that the Fellowship Hours that we celebrate at my church are the more important when compared with the Eucharistic. Not only do they emulate the shared celebration of the Good News of Christ, but they do so directly by giving us the chance to act in love with and toward one another. Moreover, all are equal in this celebration; while someone will generally be first in line, this positioning is based solely on an individual’s athleticism and his or her capacity to avoid conversation on the way out of the sanctuary to the buffet line; it is not based on some silly idea of the ontological priority of the priest, just the pangs of teenage hunger! In other words, like the early church, it is in this Fellowship where the truth of all the symbolic sacraments (and I fully understand that not everyone considers them such) actually begin to emerge: that we have been reformed for the capacity to love in a way that we were unable to do before—as equals to one another before the God who saves in Christ—and that our love for one another is practice for the love we are to express to a fallen world.

This need not mean, of course, that we rid ourselves of the Eucharistic ceremony. By no means! To the degree that Eucharist is an explicit reminder of the covenant found in Christ, who may or may not be mentioned in the Fellowship Hours, it points us in the proper direction for our Fellowship Hours: to whose life we should look at and emulate in reenacting the last supper and whose death gives us the power to do so. It’s just that I am becoming more and more convinced that, if the celebration of communion truly transfers the Grace of God to us, the transference takes place not in Eucharist but in Fellowship, for which Eucharist is only a pointer.

In other words, it is only in love and our conformity to it within church walls and beyond, that we are receiving the sacrament; for the gift (the sacrament) must match the nature of the giver, and the giver is the ground of all lesser and anterior expressions of love. After all, I am not wrong to say that the God found in Christ is love.

This love, so it seems, is best expressed in Fellowship rather than Eucharist.