Violence in the Hunger Games 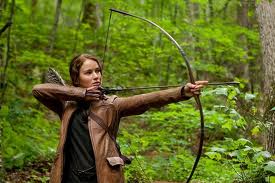 Writing a paper on Globalization calls for a serious study break and tonight I headed to the opening day of the Hunger Games. There are three things that you should know about my movie going experience:

In short I will simply say this for the movie:

That being said, I left the theatre with three quotes running though my head. The first relates to a scene where a young person (on the badteam) is killed and the crowd I was with … cheered. Now, up to that point violence had been a very bad thing and an unwanted/inevitable element of oppression and Imperial spectacle. I’m not even focusing on the violence against women angle here – just the violence alone. Chris Hedges talk of war movies the same way:

As a Christian I am always amazed by an ever-present paradox.Often in my circles, folks who have air-tight orthodoxy cred and are in complete alignment with the Creedal formulations … have an openness to violence and a willingness for militarism the betrays the very story of the Jesus that they so passionately proclaim.  Then they run into somebody like John Caputo who’s orthodoxy & ontology are surely suspect by who gets Jesus right:

“The kingdom of God is the rule of weak forces like patience and forgiveness, which, instead of forcibly exacting payment for an offense, release and let go. The kingdom is found whenever war and aggression are met with an offer of peace. The kingdom is a way of living, not in eternity, but in time, a way of living without why, living for the day, like the lilies of the field – figures of weak forces – as opposed to mastering and programming time, calculating the future, containing and managing risk. The kingdom reigns wherever the least and most undesirable are favored while the best and most powerful are put on the defensive. The powerless power of the kingdom prevails whenever the one is preferred to the ninety-nine, whenever one loves one’s enemies and hates one’s father and mother while the world, which believes in power, counsels us to fend off our enemies and keep the circle of kin and kind, of family and friends, fortified and tightly drawn.” –The Weakness of God, p. 15

I think I would rather be with Caputo and get Jesus right than to have the right Christology and miss the whole point with Jesus. The final quote comes from Franz Fannon in the Wretched of the Earth:

“The starving peasant, outside the class system, is the first among the exploited to discover that only violence pays. For him there is no compromise, no possible coming to terms; colonization and decolonization are simply a question of relative strength. The exploited man sees that his liberation implies the use of all means, and that of force first and foremost … (it) will only yield when confronted with greater violence.” (48)

I watched the movie tonight and drove home with these three quotes in my head. What do we do with movies meant to expose the Imperial spectacle of violence and end up glorifying it? Is this a case where the medium is the message and if violence is on a screen it can not communicate the badness of violence but exalts all violence? How do we as Christians navigate the spectacle of violence from our friends watching MMA to our congregants applauding war, electric chairs, drone attacks and torture? What if they have better Christology, Ontololgy, and Creedal subscription than we do … but get the violence question wrong and miss the whole point of Jesus’ life and death?

Post Script: I loved this conversation and am so grateful for the insightful and sincere responses. I am thankful for intelligent exchange without disrespectful or snarky dismissiveness.  As I have watched the conversation evolve, it has become clear that something else is needed in the post. So I want to add it for future clarity.

Empire is a particular formation of government and power and, given its pretence to be global, generates a ‘collective spirit’, an anthropological construction, that allows and approves of certain behaviours, reactions, feelings, and attitudes of the social and political actors, that shapes a certain logic and way of conceiving life, and that imposes and translates itself into values and a hegemonic Weltanschauung (ethos).[1]