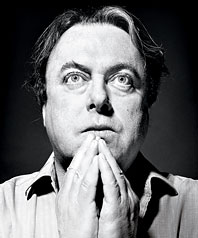 Say what you want about him (and many have said plenty) but the passing of Christopher Hitchens is a sad thing. He was perhaps the most mean-spirited of the self-titled 4 Horsemen of the New Atheists – the others being Richard Dawkins, Sam Harris, and Daniel Dennett – but he was effective.

I understand people’s reaction to his abrasive, condescending, and bombastic style. His attacks on religion were vicious behind his stunning wit and comprehensive recall of material.

Those who were big critics of his rightly pointed out that he was in some sense just a reverse fundamentalist. He had conceded that the God of Jerry Falwell, the suicide bombers, and Israeli occupation was the God up for debate and he simply didn’t believe in that God.

Here is the thing: I don’t believe in that god either! Hitchens helped me by rabidly critiquing that false god of Empire and cutting open the giant bloated carcass of Christendom with razor-sharp clarity.

“To everyone posting “Hitchens no longer exists – God”, 1- I doubt that’s actually your theology. 2- It’s not witty or cute, just jerky”

and she is right.  How could any believer think that he no longer exists? That is just a stupid thing to say! Of course Hitchens still exists – he just doesn’t have a body anymore. What are we physicalists now?  Its that kind of unthinking that he was pointing out.

The real question is where does he exist now?  The fundamentalist he hated so much would say that he went straight to hell. That of course is ridiculous and completely not Biblical. In that framework there is a holding area (like Abraham’s Bosom) and then the Great White Throne Judgement.

The ‘all we are is dust in the wind‘ crowd thinks that this is the end of the story and the he lives on in legacy and memories.

The Love Wins crowd thinks that he is with God and they are having a little talk about ultimate reality and some other fun stuff. I like the imagery of reconciling souls.

That will all take care of itself but one thing I am sure of is that Hitchens helped me think through some crazy crap I had inherited and some messed up ways of thinking that had been passed down to me. He unintentionally challenged me to streamline my faith by stripping away gobs of baggage that has gotten attached to the simple Galilean vision.

For that, I am thankful for Hitchens. I obvious don’t believe what he believed. But his critique of the established order with its crumbling foundation and rotting rafters was something that propelled me to re-think my approach to some pretty central issues.